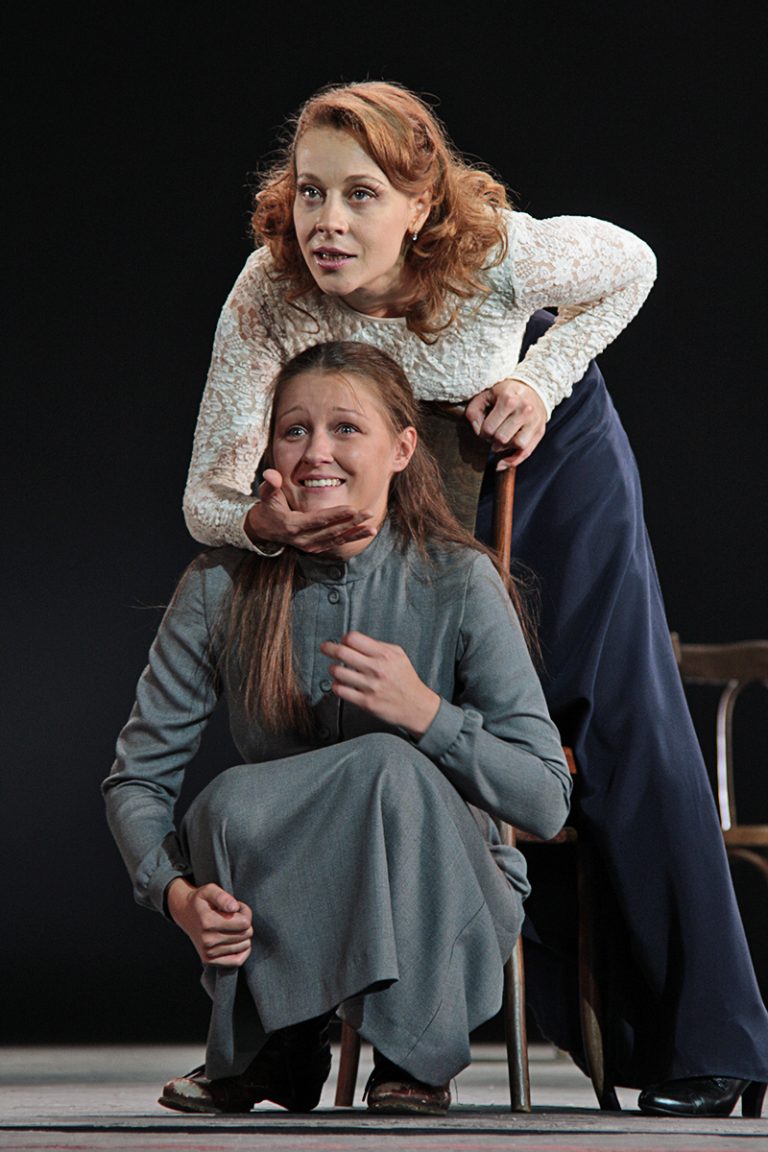 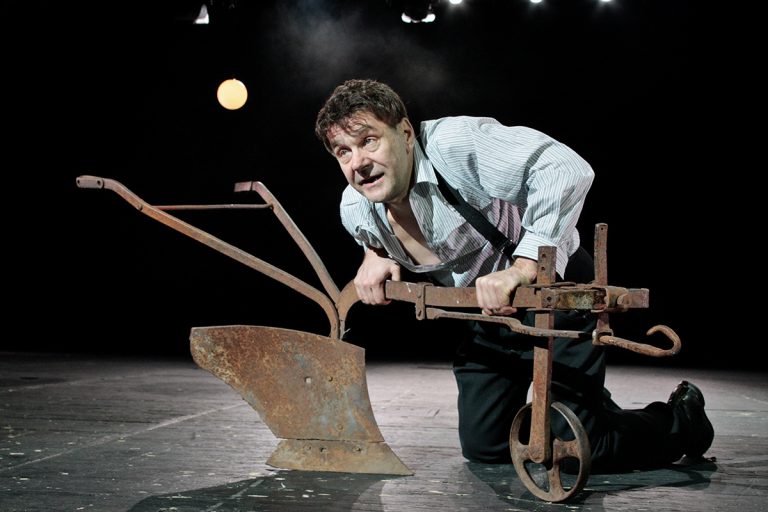 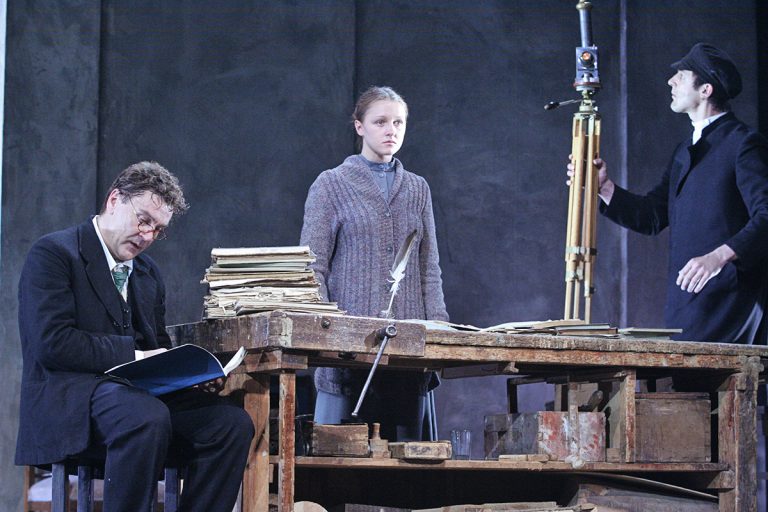 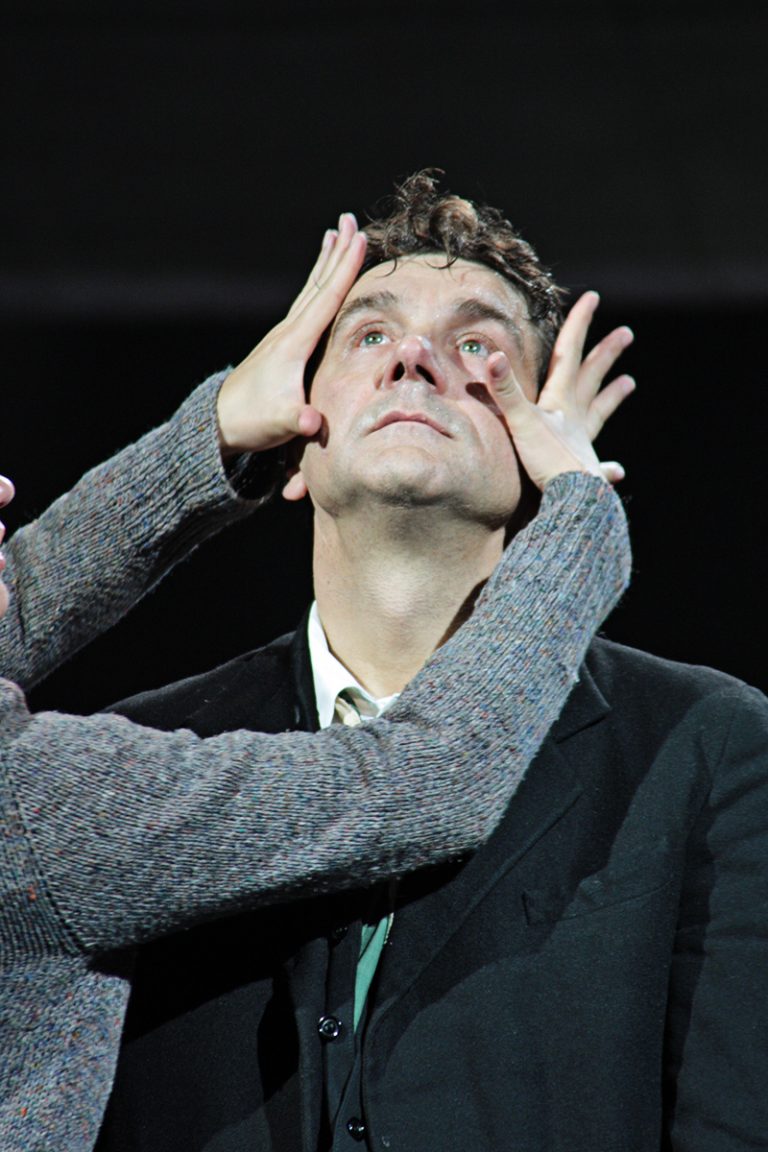 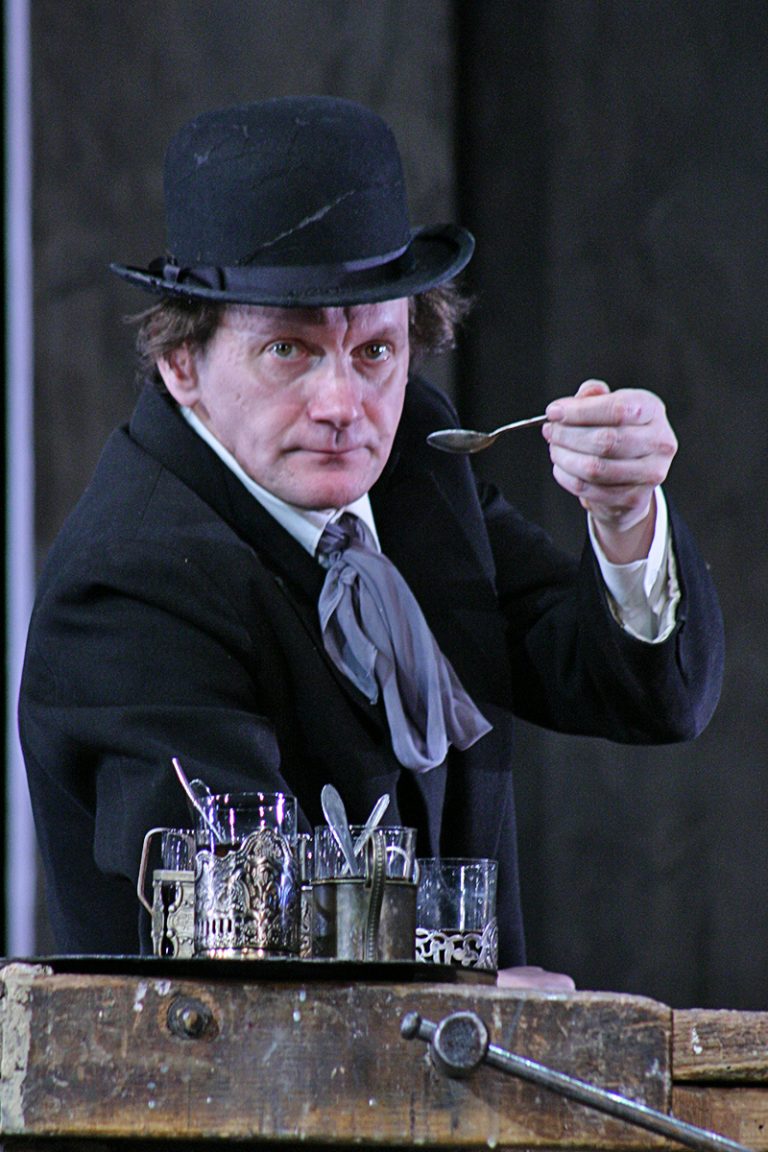 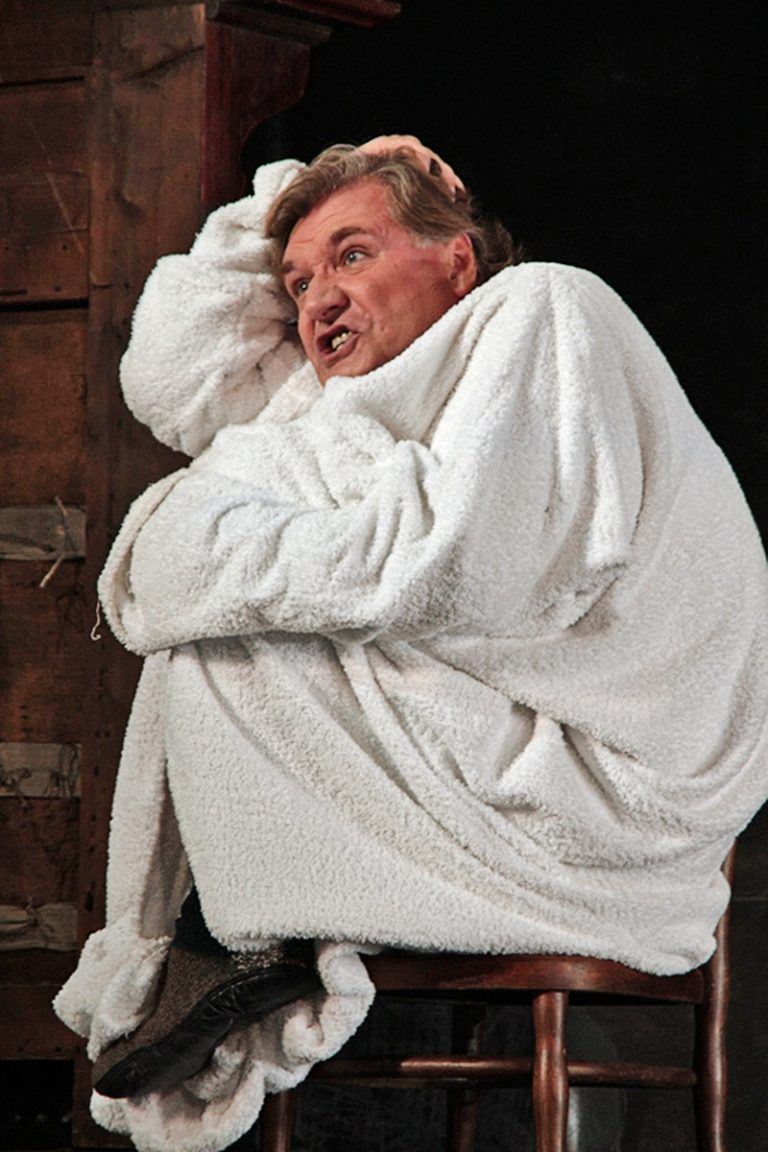 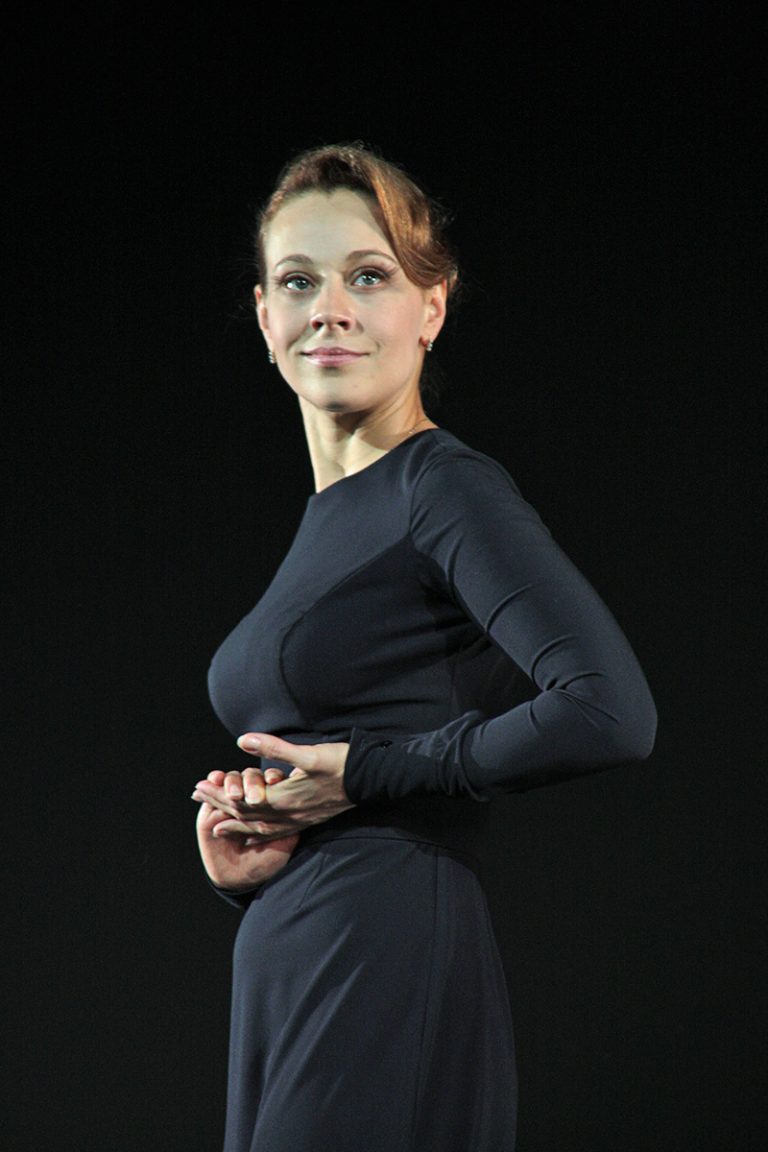 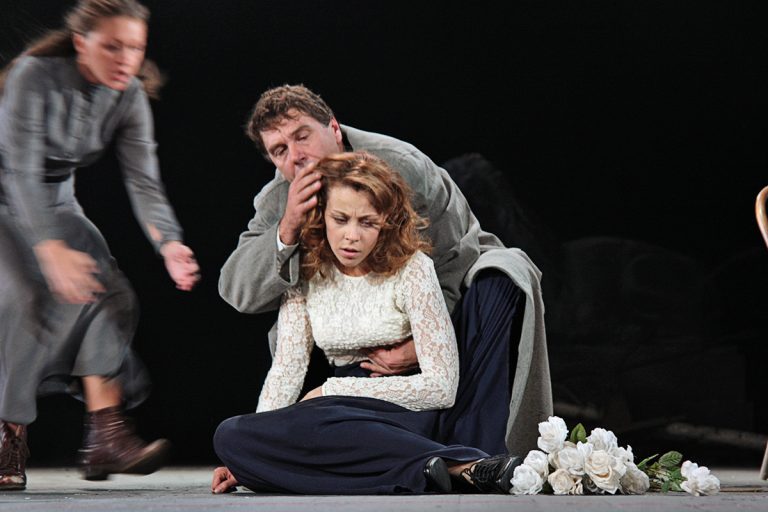 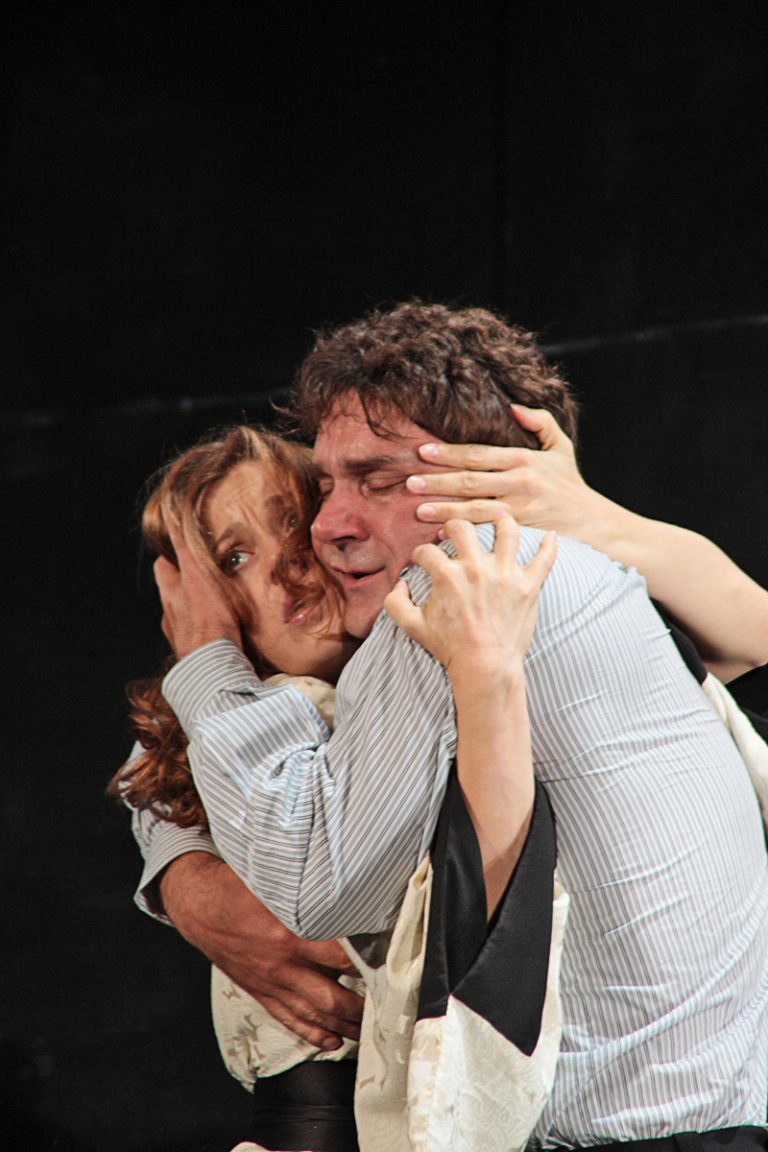 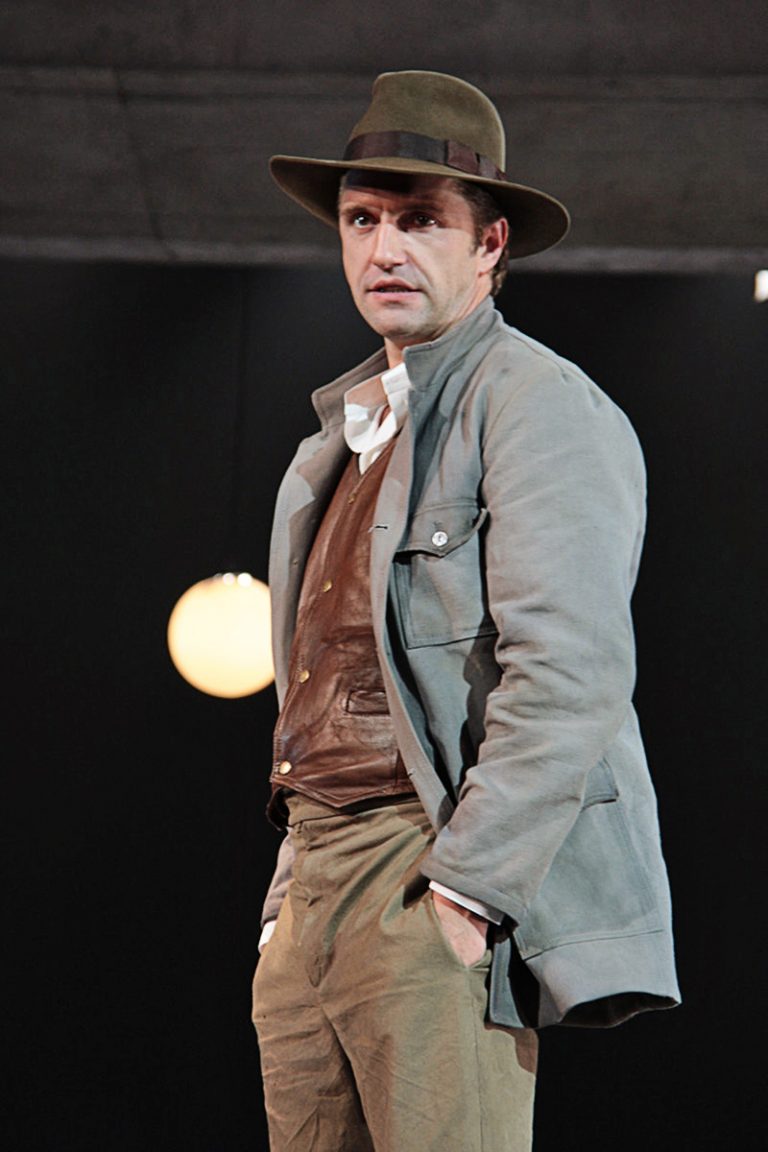 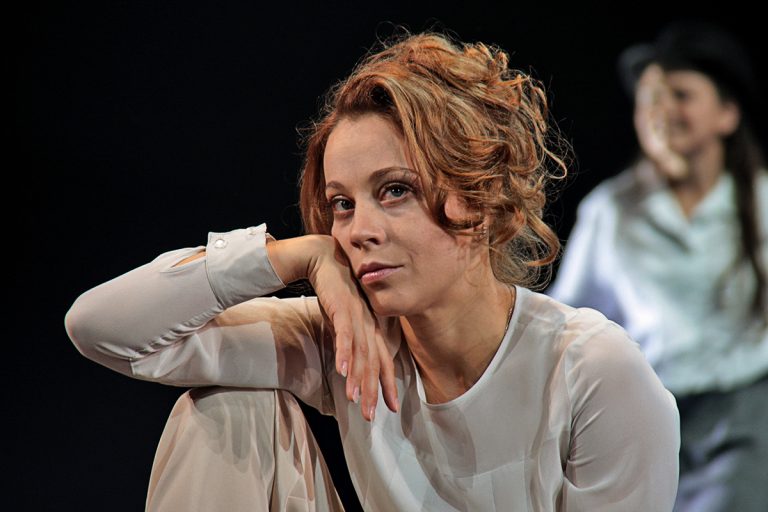 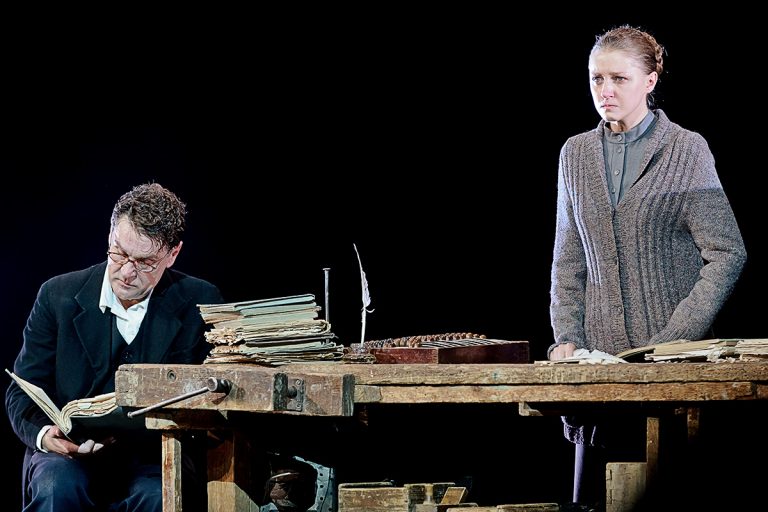 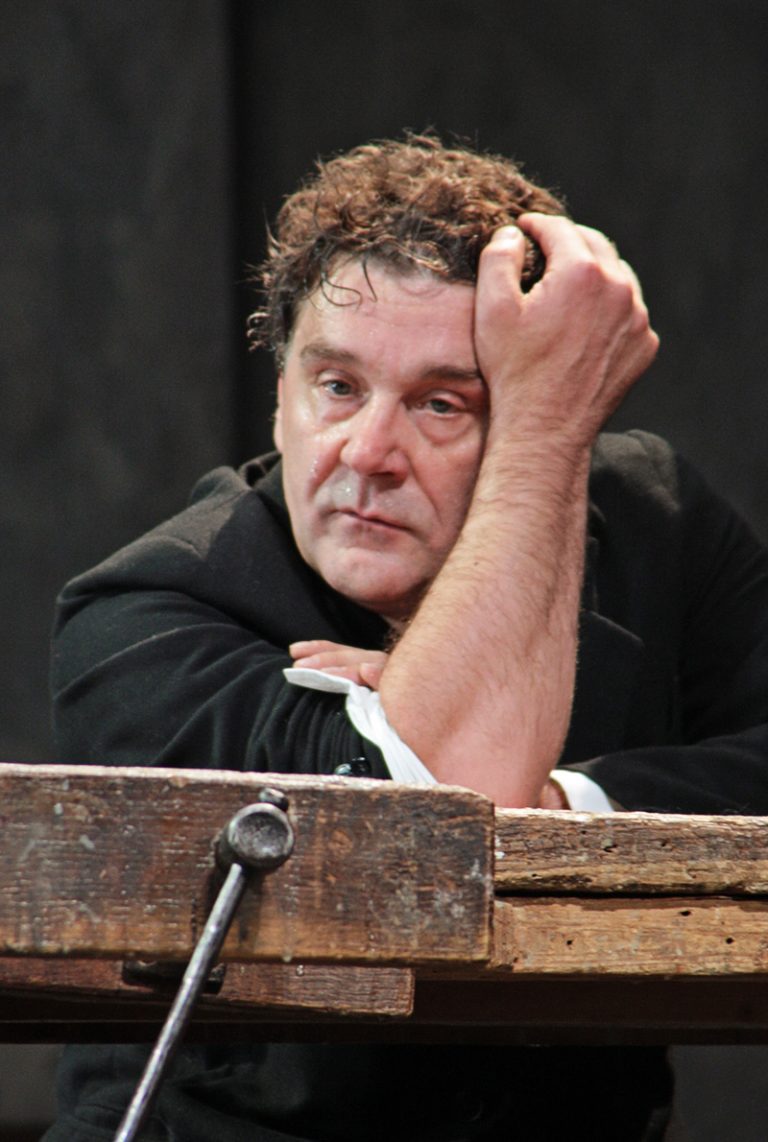 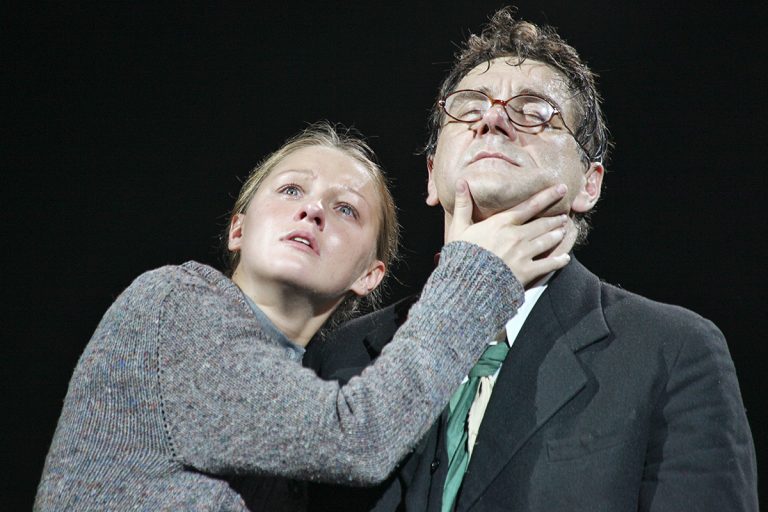 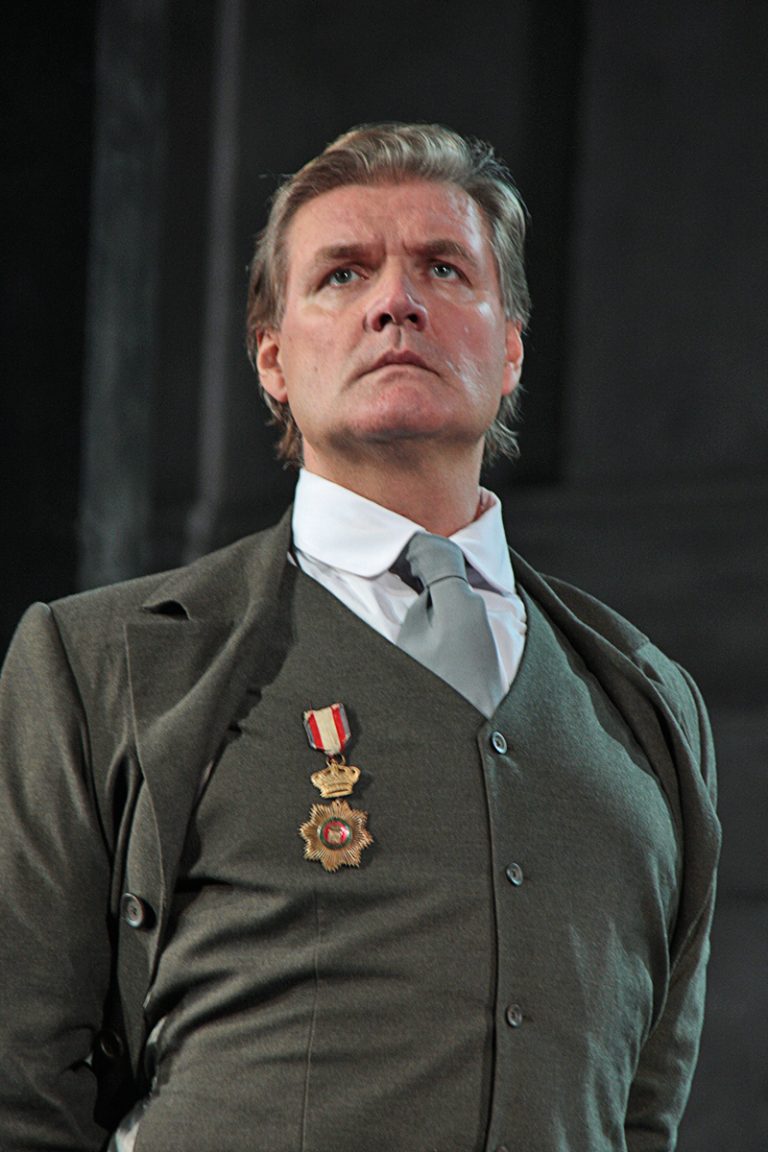 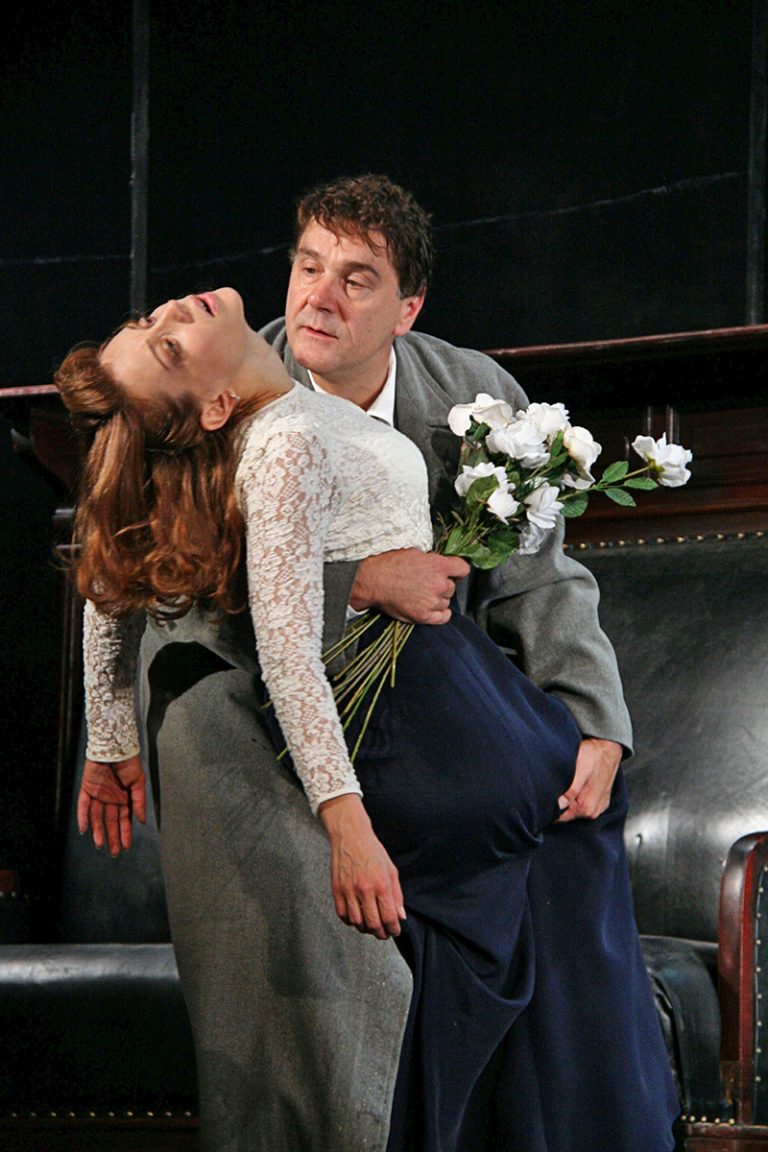 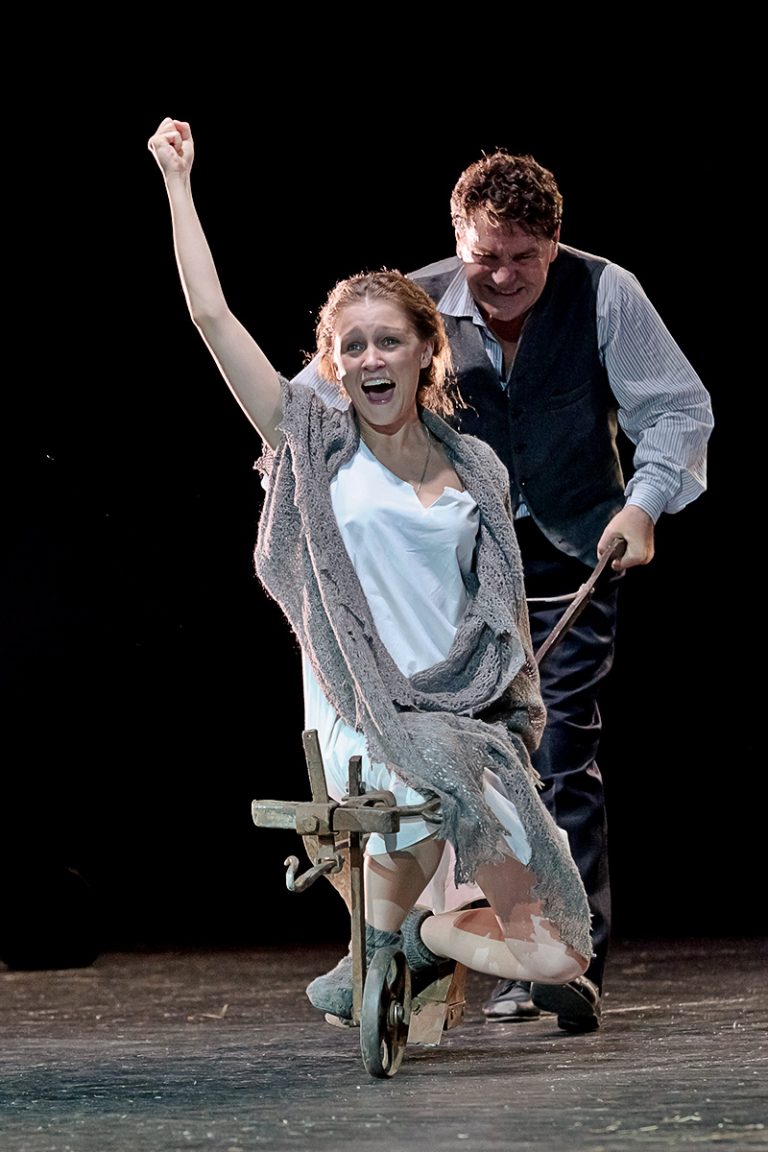 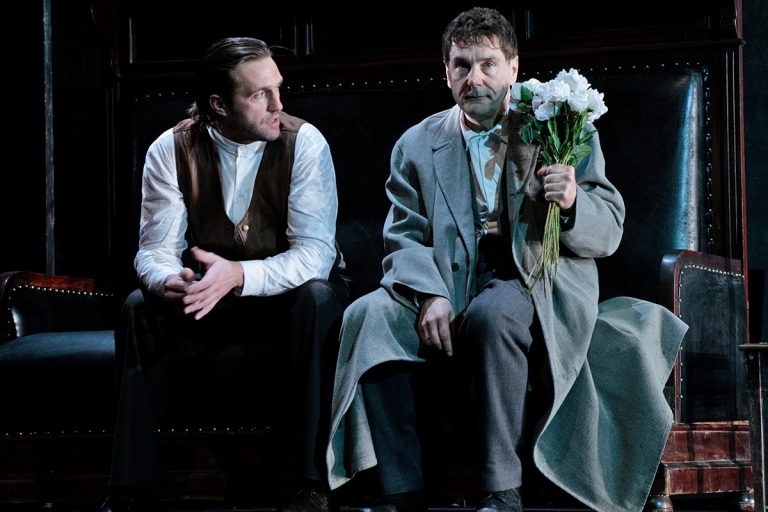 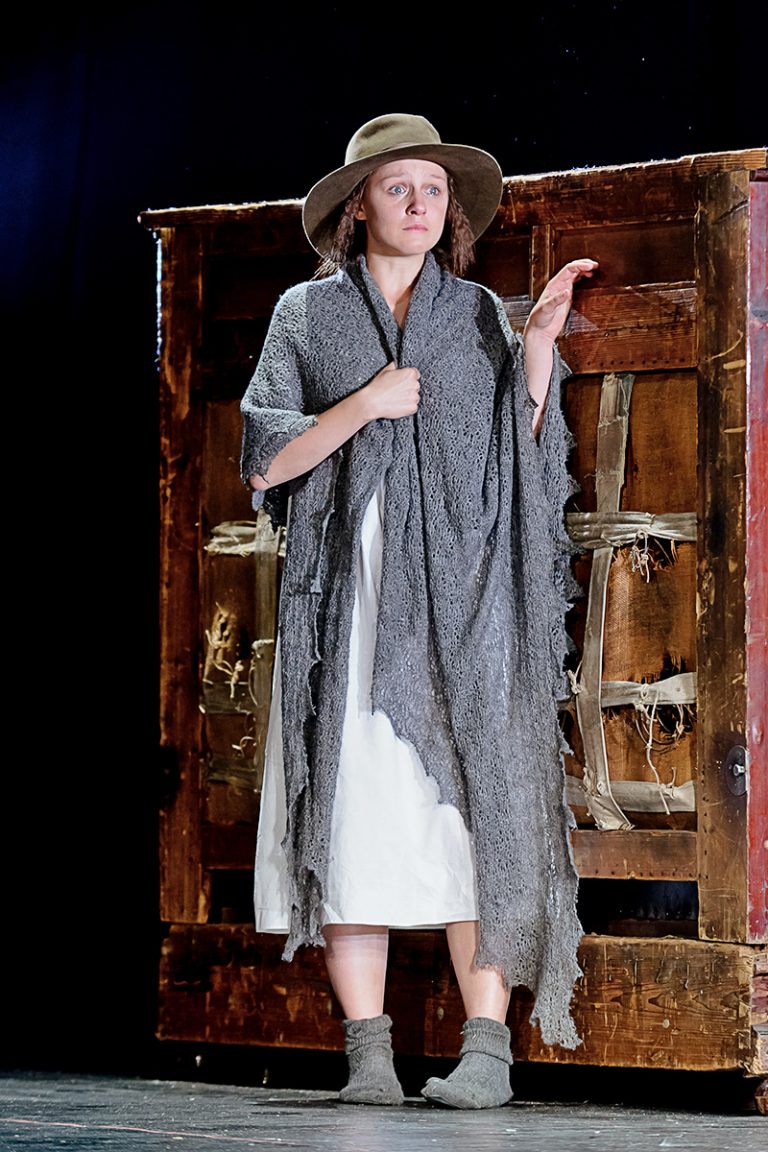 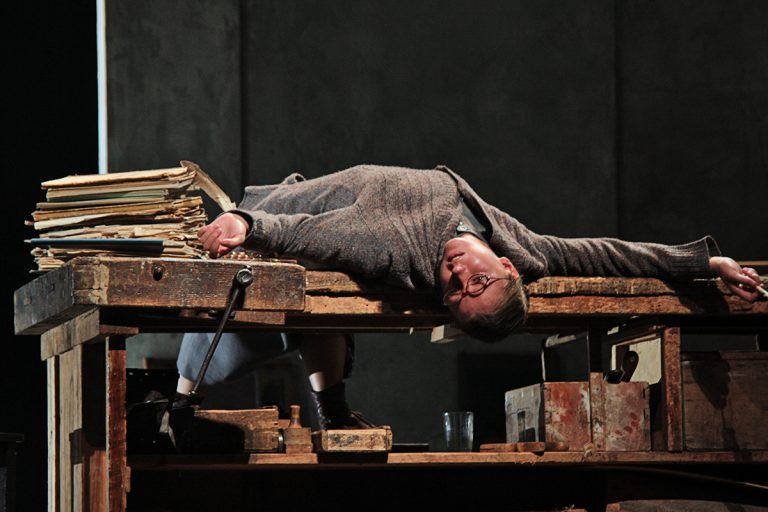 A forlorn trumpet heralds the start of the Vakhtangov State Academic Theatre's production of Anton Chekhov's Uncle Vanya, now playing just four performances at New York City Center as part of the Cherry Orchard Festival. Lethargic strings haltingly join in as Doctor Mikhail Astrov (Artur Ivanov) stares upstage into the void. This is the adagio of his life — the long period of cautious predictability before a manic final movement that will send him to the grave. This musical motif returns regularly in director Rimas Tuminas's boldly stylish staging of this story of crestfallen Russians in love.

Pure brilliance was formed last night in the John Bassett Theatre, when the intense text of Anton Chekhov met the meticulous techniques of the Vakhtangov State Academic Theatre of Russia. I am most certain that Rimas Tuminas’ direction of Uncle Vanya, in addition to the roaring sound of applause, summoned both Vakhtangov and Chekhov from the grave to admire this true piece of art.

If you think that theatre has nothing to surprise you, try ‘Uncle Vanya’. If you believe that you know nothing about the theatre, bravely go and see ‘Uncle Vanya’. The show which lives on stage for eight years, is a real Vakhtangov miracle.

We see a melodrama which continually turns to burlesque. Imagine a combination of Luigi Illica and Giuseppe Giacosa not with Giacomo Puccini but with Kay Scarpetta. Actors play naturally and magnificently, the starring ones have to be mentioned first of all: Sergey Makovetsky (Uncle Vanya), Anna Dubrovskaya (Elena), Maria Berdinskikh (Sonya), Vladimir Vdovichenkov (Astrov), Bladimir Simonov (Serebryakov). At the end of the show, long applause mix with the quire of voices chanting ‘Bravo’. Thus, the Napoli Theatre Festival got the best closer one can only imagine.

‘Chekhov and Uncle Vanya. This is how you play the life symphony in the ironic chef’, Ferruccio de Bortoli (Cariera de la Sera) 5 June 2014

Due to its lightness, ‘Uncle Vanya’ is a perfect plot for staging modern performances combining various styles: it is an ideal materials for the show staged by Maestro Tuminas, this full of energy symphony of life.
There is one mysterious element which is present in all Chekhov’s stories and which we used to consider as strange pictures with no double value. Today it perfectly harmonises with the modern theatre tendencies. I mean the fine irony which in some scenes, borders with sudden comic effects and brings surprises.

A team of fantastic Vakhtangov theatre actors galvanise ‘Uncle Vanya’. In the show staged by Tuminas, the bitterness washes ashore like lava. The trademark of Rimas Tuminas — the continuous weightless presence of music — turns each sentence into a strong melody: a morning serenade, a sorrowful song, or a hymn of joy. And above all, there are daemonic theatre findings!

It is a very talented, homogeneous, tragic but musical interpretation of the play. I am charmed, in Geneva, we have not been enjoying theatre so much since long ago. Congratulations on your tremendous success.

Best trend: The Russian invasion, with the brilliant Vakhtangov Theatre's Measure for Measure and Uncle Vanya in London, and another Muscovite troupe's A Midsummer Night's Dream (As You Like It) in Stratford and Edinburgh.

‘Uncle Vanya’ staged by Rimas Tuminas is daring and provocative; it offers an unusual view on the family drama written by Anton Chekhov. This ‘Uncle Vanya’ does not simply makes you feel a compassion, it strikes you with its ascetism, and sometimes makes you wonder why you don’t understand it. Nevertheless, this poetic theatre creation worth all possible awards. This 'Uncle Vanya' is not the cosy sort of Chekhov that made his plays British favourites, with their tea, petty conversation and the suffocating ennui of the rural bourgeoisie. In director Rimas Tuminas' production, there is no samovar and not a lace doily in sight. But the show is full of touching humor presented in a keen and delicate way.

Passion without sentimentality is the hallmark of this truly wonderful production from the Vakhtangov Theatre in Moscow, and while the Lindsay Posner version at the Vaudeville may look more like Chekhov, this one feels infinitely more authentic.
As Michael Pennington points out in a programme note, this is not the Chekhov of Stanislavski's meticulous realism, but of the Expressionist divergence taken up by Meyerhold and the man who founded this theatre in 1921, Evgeniy Vakhtangov.

This dazzling production by Rimas Tuminas is in a wholly different tradition: that of the Russian director Meyerhold, who evolved a system of acting based on sports, acrobatics and clownish grotesquerie.
Tuminas preserves every word of Chekhov's text. But nothing looks or sounds as we expect. The stage is free of clutter, although we glimpse a distant prospect of a stone lion symbolising Petersburg. Characters are also vividly redefined: the Professor and his young wife, Elena, whose rural visit causes so much havoc, are normally seen as tragically mismatched; here they clearly still enjoy an actively rumbustious sex-life and, when Vanya tries to shoot the old Prof, Elena is the first to interpose her body. And for all his ecological fervour, the visiting doctor, Astrov, is also a drunken buffoon who, in his cups, engages in a disastrous bit of DIY carpentry with the Chaplinesque Waffles. Meanwhile, Vanya's niece, Sonya, is no dowdy frump but a young girl whose passion for the doctor verges on hysteria.

Truly, it is one of the best Russian theatres, while its performances – ‘Onegin’ by Pushkin and ‘Uncle Vanya’ by Chekhov – are pieces of art that should be addressed as PIECES OF ART, in capital letters (excuse me for being pathetic). They turned inside out these well-known masterpieces pf the Russian classical literature learnt by school children. ‘See it and die’, it is said about ‘Uncle Vanya’ staged by Rimas Tuminas. The show is nine years old but it alive, full of new values, and very timely. It keeps rhythm like good watch, it attracts one’s attention, has no failures, but there is no feeling of wonkiness. Simply, actors live on stage as they breathe.

‘Uncle Vanya’ just staged at the Vakhtangov theatre is nearly ideal; there is a feeling that this show will remain the first and the main event of the theatre season — so good it is. It is impossible to go against the big and creative victory. With such a level of artistic leadership, the Vakhtangov theatre, after many years of slack, is becoming one of the most important spots on Moscow treater map.
‘Uncle Vanya’ is a performance which is free of artistic compromises, in contrary, it is a result of the toilsome theatre labour. All best features came together. Each component has its full value and provides for the harmony of the show.
Tuminas stages a hard performance with concepts, strange perversions, illogical behaviour of heroes, and absurd allegories, in accordance with the spirit of the Lithuanian theatre directorship. But at the same time, ‘Uncle Vanya’ is the actor’s theatre driven by the actor’s idea and dependent on the actor’s temperament.
There is a feeling of both the directorship dictate and the ensemble of actors presenting marvelous master pieces, possible the most rare feature of the modern theatre.

‘He is not Nekrosius, he is a different one’, Marina Davydova (Izvestiya), 9 September 2009

Among the two directors from Lithuania, Rimas Tuminas is not the most metaphorical. His means include irony, grotesque, eccentricity. Irony conjugated with compassion is the touchstone of his style. The irony which does not cancel but highlights the compassion to Chekhov’s heroes, is the milestone of the unique style of Rimas Tuminas. In ‘Uncle Vanya’, the Vakhtangov theatre actors are submerged into the atmosphere of the scenic burlesque, he sprinkled the magic water of life onto their sharp and passionate play-acting talents that we just about to begin fading. The stunning grotesque of Tuminas performances is in fact much warmer than the cold academism, which is mistakenly called some times as the respect to old traditions.

The Vakhtangov actors break dull aging traditions of presenting Checkhov’s personages in the glaring and saucy way. If in the play, Serebryakov is a self-affected egoist, in the representation of Vladimir Simonov we see a vivified monument, that sets inflexible fees as the Statue of the Commander. If Elena Andreevna is described as a lady with the mermaid blood, Anna Dubrovskaya plays a character who only for a moment — in the final scenes — appears a real woman. Uncle Vanya says, “When there is no real life, people live as mirages”. Odd mirages come from the darkness of the old house, some of them in Chaplin’s bowler (as Waffles plaid by Yury Kraskov), others — in cowboy hats (as Doctor Astrov played by Vladimit Vdovichenkov). All this macabre grotesque exists to emphasise two small and awkward human beings — Sonya and Ivan Petrovich. Maria Berdinskikh and Sergey Makovetsky do not tell the story of the lost life. Their heroes, looking like Lilliputians in the Land of Giants, have no idea that it is only them who really suffer and live with dignity. On this dignity the tragedy of the performance is based.